Vicki Hertel of Sun Gold Farm in Forest Grove says her family farm couldn’t survive without “the help of hungry, wonderful people in Portland.” She tells me that we are the ones that support them and keep the farm natural, something she doesn’t believe would be possible in most other parts of the United States.

Our urban lifestyles and input also determine small details of the Hertels’ daily lives. Ten years ago, they started a CSA (Community-Supported Agriculture) to bring weekly shares of fruits and vegetables to Portland residents. This year, they bring leaf lettuce pots and tomato pots to the Hollywood Farmers Market; these plants will thrive in any apartment with enough sun and water. Just leave the heart of the lettuce intact and it will replenish all summer.

Before the Hertels grew produce, they were conventional dairy farmers. About twenty years ago, they were forced out due to a change in regulations. Dairy Creek was ten feet from their house, which meant it was close to cows and had a potential to become polluted, which the new regulations did not allow. Within a day, they sold their cows and began a major life change. 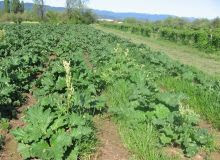 The Hertels transformed the dairy to a fruit and vegetable farm and went from using chemical fertilizers and sprays to organic practices. Vicki tells me of their experience interacting with end consumers for the first time at farmers markets. “We were handing people an ear of corn and that was the person who was gonna eat it,” she says. “We didn’t want any chemicals on it anymore.”

Sun Gold brought in ladybugs, did their best to attract birds to control insect populations and forbid the shooting of coyotes on their property-a Sunday ritual at the time for farmers.

They also prevent plant diseases with crop rotation. This means putting a crop in the ground for one year and then not putting it in the same place again for five. As part of the rotation, half of their land grows timothy grass for hay. It’s less work to upkeep and allows the Hertels to devote more time to the fruits and veggies they bring us. That’s something we can all be grateful for.