Just outside Oregon City, in Beavercreek, Oregon, is a farm doing some extraordinary work.

On one hand, Boondockers does what most farms do: they raise ducks, chickens, pigs, turkeys, sell seeds, and provide eggs and poultry to some of Portland’s up and coming restaurants. But it’s the way they’re doing it that’s different. Some may call it “old-fashioned” but in a world of mass-produced poultry and beef, genetically modified goodness-knows-what, and tasteless produce, Evan Gregoire and Rachel Kornstein of Boondockers Farm are committed to repairing a broken food system on their farm by raising heritage fowl and cultivating heirloom tomato seeds. Rachel has years of culinary training and a true love and respect for animals and Evan completed Oregon State University’s Master Gardener program, making him a true steward of the earth’s soil.

A brief note on the definitions of “heritage” and “heirloom”: the words are somewhat synonymous. Heritage refers to animal breeds common on farms before industrialization of meat, heirloom refers to seeds that are at least 75 years old and again, are not grown in vast quantities. This little fact alone should tell you how drastically our food system has changed in just the past 100 years. Mass production of food has left our soil depleted of nutrients, leaving in its place a nutritional paucity in our food system. Boondockers Farm is committed to plant and animal diversity and a healthy farm ecosystem, the effects of which are reverberating throughout the restaurant community and farmers markets throughout Portland.

On a cool summer morning I drove down to the farm, encountering a sweet white farmhouse shrouded by leafy trees. Just to the right sat a beautiful red barn – huge, in fact. As I waited for Rachel to let me in the front gate, I drank in the peacefulness of the scene in front of me, overhearing the clucks of chickens, quacks of ducks, and the occasional moo of a cow. Once she let me in, we walked toward the old farmhouse while chatting. Rachel was clad in well-worn overalls and wellies; well-equipped for working knee deep in dirt and animals. 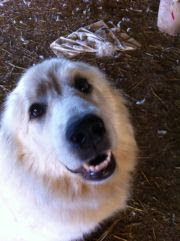 The first thing I noticed about Rachel was her tremendous energy. While I made my inquiries, she made her rounds; checking on fowl, replenishing water tubs, scratching a cow’s forehead, herding an obstinate and somewhat belligerent turkey back into the barn. I struggled to keep up with her! Our companion in the barn was Amalie, a Great Pyrenees with a heart of gold. Looking up at me, she practically insisted on being pet, rubbed down, and scratched behind the ears. But Amalie plays a huge role on the farm. She and two other Great Pyrenees are the livestock guardians, protecting the flock from predators such as raccoons, bears, and foxes. They are fierce protectors of the fowl and at the same time, gentle as lambs.

Boondockers Farm also specializes in researching, cultivating, and growing heirloom tomato seeds, as well as other veggies. Sounds like a master gardener’s hobby, but there’s a method to the madness. Heirloom seeds provide a more nutrient-dense fruit with a more complex flavor profile (not to mention an array of stunning colors). In other words, the tomato tastes like a tomato. The diversity of the seed means a more healthy, nutrient-packed tomato – better for the human, better for the soil.

The fowl that roam about the barn and beyond are Ancona and Saxony ducks, and Delaware chickens. Boondockersis the primary source of the most diverse populations of Anconas in the U.S. They’re a hardy and adaptable breed, an excellent layer of eggs and have less fatty meat. I saw ducks in all life stages on the farm, from eggs hand-washed by interns, to ducklings just hatched, to teens and adults in the big barn and finally to slaughter, done humanely and respectfully.

The full cycle of life is ever present at the farm: ducks and chickens foraging on slugs and worms, cows chewing on grass, mama pigs with piglets lying about in a spacious barn. Every living being plays a precious role on the farm to support a healthy ecosystem. Hollywood Farmers Market is proud to have Boondockers as one of its vendors.