Herb of the Month for November: Rosemary

We feel it in the air: the heat waves of summer have passed, and the coolness of autumn begins. The smokey smell from wood-burning fireplaces turns my attention toward the fullness of fall, and with fall, more indoor activities: many of us turn toward cooking as a pleasant indoor pastime. Thanksgiving is fast approaching which means Christmas gift giving, family get togethers, and cooking will soon be upon us. So this month, as we start to settle in for the winter, let’s talk about rosemary. Most of us are familiar with the fresh, almost lemony-pine-like fragrance of rosemary. But did you know that rosemary has a traditional legacy in rituals, healing, as well as culinary uses?

Rosemary seems to have an unusually rich political, romantic, mystical, and medicinal history for an herb, not to mention the deep appreciation of chefs all over the world. Rosemary got it name because it was originally most often found growing by the ocean. Rosemary literally means “dew of the sea”.

Regarded as the symbol of friendship, loyalty, and remembrance, rosemary is also thought of as having magical properties. However, other than it is mentioned as having “magickal” properties, little specifically was provided in the resources I searched. Of the herbs we’ve covered in this series to date, rosemary has a greater wealth of historical uses and importance documented. “Our Herb Garden” is a recent find on the rich history and some of the folklore of herbs. A few excerpts on rosemary are listed below.

The folklore and medicinal uses of rosemary include such oddities as protection from plague to a cure for the common thief. Uses include: 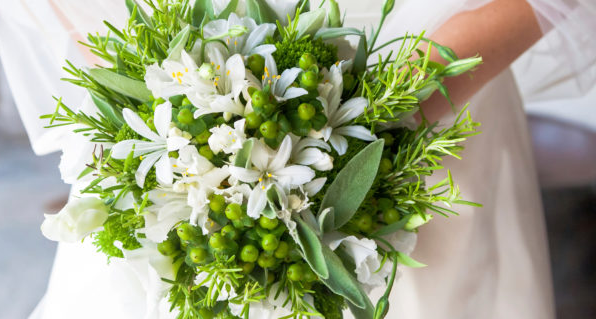 As a part of the wedding ritual, rosemary was often entwined into a wreath, dipped in scented water and worn by brides at the altar. The wreath symbolized fidelity, love, abiding friendship and remembrance of the life the woman had led prior to her marriage. For example, Anne of Cleves (1515 – 1557), Henry the Eighth’s 4th wife, wore a rosemary wreath at their wedding.

It was also customary for wealthy bridal couples to present a gilded branch of rosemary to each wedding guest.

Using rosemary in today’s weddings is still practiced by many modern brides. Not too long ago this medieval tradition was carried out at the wedding of a contemporary of mine and we all walked away with sachet bags filled with this aromatic herb.

Rosemary as well as thyme were used on St. Agnes’ Eve, an evening and day that honors St. Agnes, the patron saint of virgins and young girls. According to Wikipedia it is said “to aid young girls in discovering their future husbands”.

The history of rosemary includes the common saying: “Where rosemary flourishes the lady rules.” However, the tale warns men that by simply damaging or destroying that same rosemary, he will not find relief from his lady’s rule.

It is recorded that during the 17th century in counties where rosemary grew into large plants, musical instruments, carpenters rules, and a myriad of other implements were crafted from the wood. The French even believed that combing their hair once a day with a rosemary wood comb would prevent giddiness.

Rosemary was used to create Essence of Mustard which also included spirits of turpentine and black mustard seed. The resulting oil was not prone to going rancid and was used by clock makers and for other “instruments of precision.”

Since ancient times rosemary has been hailed for its medicinal properties, often used in teas to help alleviate muscle pain, boost the immune and circulatory system, and promote hair growth. There are a number of references to rosemary being used for strengthening the memory and as a symbol for remembrance — back to the use in weddings and death rituals.

Greek scholars were known to twine rosemary in their hair when studying for exams in the hope of aiding their memories. Juniper berries and rosemary were burned in French hospitals to help purify poor quality air and to prevent infection. They also used rosemary for its healing powers. In the French language of flowers, rosemary represents the power of rekindling lost energy. Modern medicine has noted that it is a good source of iron, calcium, and vitamin B-6.

Personally, as a modern day user, I have found rosemary essential oil to be very helpful in memory retention, and use it regularly before I make my way to work in the morning.

Rosemary is an evergreen shrub and a member of the mint family. It is related to basil, marjoram, oregano and a native of the Mediterranean area. There must be something about the region around that sea that makes it conducive to growing herbs. Countries such as, but not limited to France,  Greece, Turkey, Israel, Spain, and Italy surround the sea and are countries known for their superb cuisine.

Used as a culinary condiment, it is also used to make bodily perfumes as well as healing oils and potions. It has also been used as a food preservative, a stable antioxidant commonly used in cosmetics, and plastic food packaging.

If you live in a colder climate, like most of us reading this article do, you know rosemary leaves don’t survive the winter, so finding ways to preserve your harvest is necessary for year round use.

Rosemary is typically prepared as a whole dried herb or a dried powdered extract, while teas and liquid extracts are made from fresh or dried leaves.

Whether you’ve picked rosemary sprigs fresh from the garden or purchased them from the grocery store, prepare them and pop them in the refrigerator shortly after you get home for the best and longest lasting results. It is best to wash fresh rosemary when you’re ready to use it. Loosely wrap the rosemary sprigs in a slightly damp paper towel, and then again in plastic wrap or a plastic storage bag. Avoid wrapping the rosemary too tightly or washing the leaves or sprigs in advance. Washing adds excessive moisture and can damage your bounty due to trapped moisture encouraging mold growth. We tried putting rosemary in a glass of water in the refrigerator, and it only tuned into a moldy mess. When stored properly, rosemary will last around 10 to 14 days in the refrigerator.

But if have more than you can use in two weeks, try freezing or drying rosemary. Rinse off the rosemary sprigs and let them thoroughly dry. Finely chop the sprigs into smaller pieces. A great way to freeze is to divide the rosemary into ice cube tray compartments, fill them with water or soup stock and freeze. Once it is frozen, transfer the rosemary ice cubes to a storage bag until ready for use. Frozen rosemary is best used within 4 to 6 months.

Having to discard fresh rosemary is a bummer, but if the leaves have turned dark brown or become brittle, they are no longer fit for use. You should also examine the stems closely for any signs of mold if refrigerated rosemary is reaching the end of its shelf life. 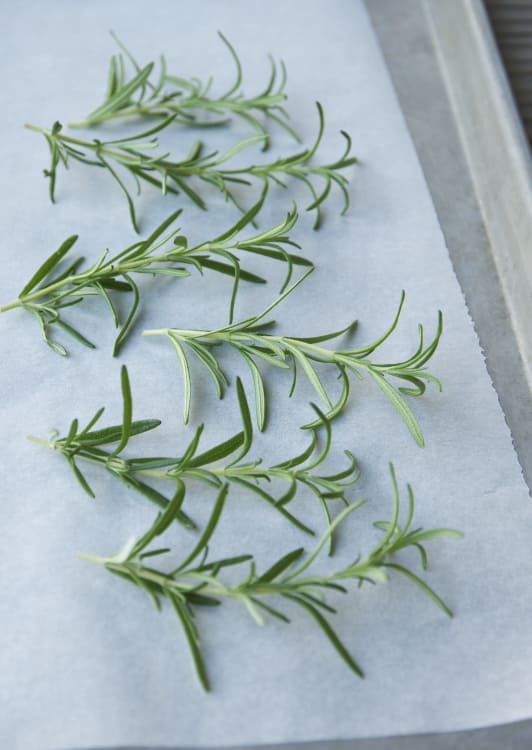 Dried rosemary isn’t quite as pungent as fresh, but it lasts the longest. Rosemary can be air dried, oven dried, or dried in a dehydrator.  Air drying can be done two ways: Simply arrange whole sprigs of rosemary in a single layer on a plate and place in a cool, dry place for several days or  bundle sprigs together, tie them up at their bases, and hang in a well-ventilated area to air-dry.

Rosemary dries evenly in the oven. Place sprigs on a parchment paper-lined baking sheet and set the oven on the lowest temperature possible. Choose the “warm” setting or even just let the pilot light do the work, if you have a gas oven. Lastly, you can place rosemary sprigs in a food dehydrator, select the lowest setting, and wait a couple of days. Due to rosemary’s thicker texture, the dehydrating process might take a little longer than other herbs.

Once completely dried remove the leaves from the stems and store in a tightly sealed container. You can store the leaves whole or grind them into a powder with a mortar and pestle or herb grinder. For the best quality, use within one to three years.

The Spanish are known to have cultivated rosemary in the 13th century, and it was a popular condiment with salted meats from the 15th to 18th centuries. Fresh or dried leaves were and are still used in traditional Mediterranean cuisine. The bitter, astringent taste and characteristic aroma complements many cooked foods. Herbal tea can be made from the leaves. When roasted with meats or vegetables, the leaves impart a mustard-like aroma with an additional fragrance of charred wood that goes well with barbecued foods.

My favorite smell is of rosemary bread baking. It is so hard to resist slathering butter on a fresh baked loaf that around my house it typically doesn’t last a day. The fresh, bright flavor of rosemary can be used for everything from grilled vegetables and roasted lamb to savory marinades and herbaceous cocktails. It is great in fruit salads, meats, eggs, stuffings, or meats (especially lamb). A versatile aromatic, rosemary is great in both savory and sweet recipes.

I love the cooking site “ A Taste of Home” There are always wonderful recipes to try and new ideas on using herbs. But researching rosemary presented more than I could anticipate. 40 Fresh Rosemary recipes start off with some delicious recipes such as bread or rolls with rosemary, olive oil with rosemary, or vegetables with rosemary,. But have you ever heard of making rosemary ice pops to use in spritzers or other drinks? What an exciting addition to its already many uses.

Rosemary’s small, gray-green leaves look similar to small pine needles and have a bittersweet, lemony, slightly piney flavor that makes it great for pairing with:

One of my favorite ways to use fresh rosemary:

Preheat the oven to 425°F. Line a baking sheet with foil or a nonstick baking mat.

Halve the potatoes and chop them into bite-sized pieces, leaving the skins on. Transfer the potatoes to a large bowl and toss with the olive oil, rosemary, and salt. Make sure the potatoes are evenly coated with oil.

Spread the potatoes out on the baking sheet. Bake for 45 to 50 minutes until the potatoes are deeply golden, stirring every 15 minutes. Serve while still hot and crispy.

Visit Taste of Home  or 39 Delicious Things to Do with Rosemary for more excellent recipes. 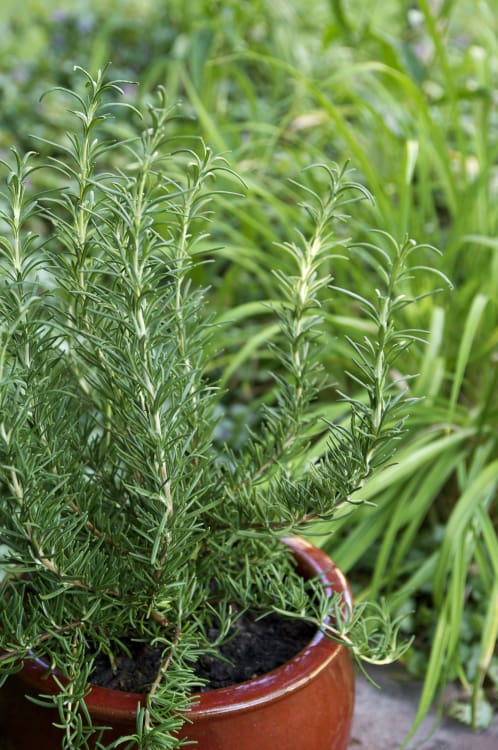 Rosemary is an attractive, easy to grow, pest-resistant, and drought-tolerant herb and is often used as an ornamental plant in gardens. It can grow quite large and retain attractiveness for many years.

In colder climates it is recommended that rosemary be grown in containers, allowing the plants to be brought in. It can be pruned into formal shapes, low hedges, and has been used for topiaries.

Some rosemary plants grow up to 6 feet tall or more, but standard varieties are usually around 3 feet and bushy. Although rosemary can reach a sizable dimension, it is a slow-grower in its first year. The trailing rosemary makes a great groundcover which spreads widely and has  a dense and durable texture.

Rosemary can withstand droughts, surviving a severe lack of water for lengthy periods. However, plants can be killed by overwatering. Expect flowers in spring and summer in temperate climates, but  in warmer climates, the plants can be in constant bloom and come in white, pink, purple, or deep blue.

Rosemary also has a tendency to flower outside its normal flowering season; even as late as early December, and as early as mid-February.

Thanks for catching up with this month’s Herb of the Month. Next month find out more about sage.